This year  has been full of events related to Doctor Zhivago. Two important anniversaries explain the flood of activities. November 22 coincided with the 60th anniversary of the publication of Doctor Zhivago by Feltrinelli in Milan. In addition, the centenary of the October Revolution (October in Russia but November in the West on account of the different calendars) added to the interest on Doctor Zhivago. Here is the chronicle of my activities in this connection.

Throughout the year I have been collaborating with three different documentaries 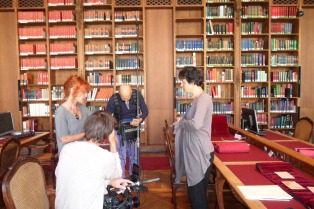 BNF, Paris. Nino Kirtadze is on the left and Anne Verdure-Mary on the right

on Pasternak and Doctor Zhivago which are being produced by the BBC, by Producciones Arboleda in Spain, and by the Franco-German channel ARTE. I took an especially active role in the ARTE documentary. I spent the last week of June in Paris shooting with the gifted Georgian director Nino Kirtadze. This involved five days of shooting at, among other places, the Bibliothèque nationale de France (site Richelieu-Louvois). The visit to the BnF also allowed me to study in detail three long postcards that Boris Pasternak sent to Brice Parain, lecteur at Gallimard. I thank Anne Verdure-Mary, conservateur of the Département des manuscrits at the BnF, for her help in facilitating the consultation of the documents and for her help in obtaining the rights for publishing. The transcription of the three postcards will soon appear in an article of mine that is forthcoming in a volume edited by Lazar Fleishman. Kirtadze, her assistants, and I also managed  to fly to Milan on June 30 in order to shoot with Carlo Feltrinelli at the new Feltrinelli Foundation in Milan. For the occasion, Carlo Feltrinelli brought out from 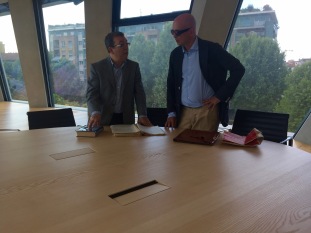 With Carlo Feltrinelli at the new Feltrinelli Foundation. The original typescript of Doctor Zhivago is on the table

the safe the original typescript of Doctor Zhivago. This is the typescript that Boris Pasternak sent to Giangiacomo Feltrinelli through Sergio d’Angelo in May 1956 and that was used to prepare the Italian edition in 1957. In addition, Carlo Feltrinelli proudly told us that the large “passeggiata” facing the new Feltrinelli Foundation has been named after Boris Pasternak (see here). The ARTE documentary should be released in February 2018.

On July 10, I gave a talk on the publishing history of Doctor Zhivago at the Fondazione Sardegna in Cagliari.  On July 30, I presented my book Zivago nella Tempesta (Feltrinelli 2015) at the Festival “Sette sere, sette piazze, sette libri” in Perdasdefogu (Sardinia). I thank Alessandra Piras and Giacomo Mameli for having organized the events and Prof. Luciano Marrocu (University of Cagliari) for the insightful introductory comments and the moderation of the first event as well as for his comments in the second event. Special thanks also to Gavino Murgia who provided the beautiful music that accompanied the event.

On October 2, I gave a talk at the University of Pisa (Dipartimento di Filologia, Letteratura e Linguistica) at the behest of Professor Stefano Garzonio. The title of the talk was “I dattiloscritti dello Zivago e la fonte dell’edizione pirata russa della CIA” (“The Zhivago typescripts and the source of the pirate Russian edition by the CIA”). The talk presented the main results contained in my book Zhivago’s Secret Journey (Hoover Press, 2016).

On November 8, Carlo Feltrinelli and I gave a joint talk at EL BORN Centro de la Memoria in Barcelona. 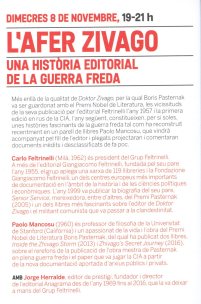 Poster for the talk at the Centro de la Memoria

The talk was part of a series of talks on the Russian Revolution. It was an interesting time to be in Barcelona: the date of our talk coincided with the general strike. Fortunately, the Centro managed to stay open despite the strike and we were able to deliver the talk. It was an honor to have as moderator an eminent publisher such as Jorge Herralde, founder and director of Editorial Anagrama. And, of course, a great pleasure to continue sharing with Carlo Feltrinelli the Zhivago adventure.

On November 16, I presented Zivago nella Tempesta (Feltrinelli 2015) at the Feltrinelli bookstore in Ferrara. The event came about thanks to the initiative of my friend and colleague Marcello d’Agostino (Università Statale, Milan) and his wife Savina Scavo. It was organized as a conversation with Marco Bertozzi, 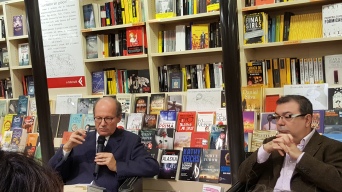 With Marco Bertozzi in Ferrara

a philosopher at the University of Ferrara. It was a great pleasure to share the stage with Marco, whose subtle reading of my book and insightful questioning made the evening a great success. 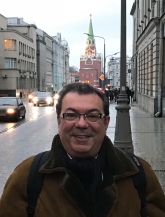 from November 29 to December 3. I had not been back in Moscow since my two month stay as a guest of the Steklov Institute of the USSR Academy of Sciences in summer 1990. The invitation this time came from the publishers of the Russian translation of my book Smugglers, Rebels, Pirates. Itineraries in the publishing history of Doctor Zhivago (Hoover Press, 2015). The Russian title is: Контрабандисты, бунтари, пираты, Перипетии истории издания«Доктора Живаго» (Азбуковник, Москва, 2017). I am delighted with the edition. The publishing house Azbukovnik is run by Leonid Grigorovich and Irina Barsel. Leonid and Irina organized two events at the Moscow Book Fair (Non fiction, no. 19) and an event at the House/Museum Pasternak in Peredelkino. As chance would have it, my assistant and collaborator Paul Borokhov was in St. Petersburg during this period and came down to join me for the talk in Peredelkino and for the second event at the Moscow book fair. 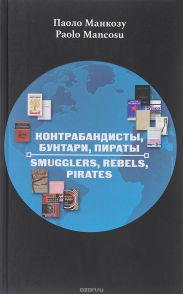 The first event at Non fiction no. 19 took place on November 29. Azbukovnik presented its recent titles including, in addition to the Russian translation of my book,  a book edited by Lazar Fleishman titled Новое о Пастернаках [New studies on Pasternak], (Азбуковник, Москва, 2017). The book contains, among many other interesting things, a long article I co-authored with Paul Borokhov: “Sergio d’Angelo’s correspondence with Olga Ivinskaya and Boris Pasternak” (pp. 218-309). In addition to the organizers of the event, Leonid and Irina, I was delighted to share the stage with Elena Vladimirovna Pasternak and Lazar Fleishman. Elena Vladimirovna and Lazar  were also present for the talk in Peredelkino, on December 1, and for the second event at the Moscow Book Fair, on December 2. 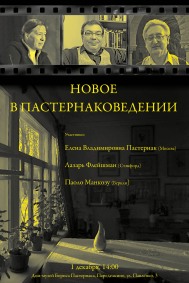 Poster for the talk in Peredelkino

on December 1, was very moving. After so many years of engagements with Pasternak and Doctor Zhivago, it was quite an emotional moment to visit the place where the poet lived and worked. For the occasion, I delivered a talk on my recent work on the Ivinskaya case titled “Olga Ivinskaya and the loss of Pasternak’s “will” “. Paul Borokhov joined me and provided simultaneous translation. The talk has been posted on youtube at the following link. My talk was followed by a talk by Lazar Fleishman. The atmosphere was pleasant and convivial; the conversation after the talks went on for hours.

Finally, on December 2, there was the second meeting organized by Azbukovnik at the Moscow Book Fair. At the center of attention was Elena Vladimirovna Pasternak’s new book on Leonid Pasternak (Boris’ father, a famous painter). 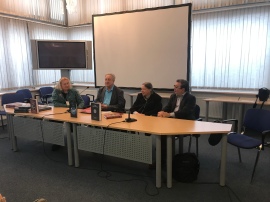 But other recent publications by Azbukovnik (including Smugglers in Russian) were also discussed.

The last event of the semester was a talk with Stefano Garzonio at the Scuola Universitaria Superiore IUSS in Pavia. The event was organized by prof. Andrea Sereni, a friend and a colleague. After brief presentations 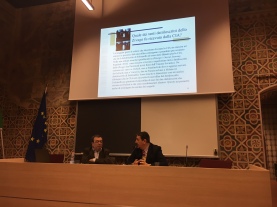 by myself and Prof. Garzonio, the event consisted of a conversation between the two of us and questions from the audience. I am very grateful to Stefano not only for his deep and illuminating comments at the event in Pavia but also for the way he has encouraged me and supported my research on Doctor Zhivago in the past five years.