I am delighted to announce that Zhivago’s Secret Journey: From Typescript to Book (Hoover Press, Stanford, 2016) is now out. 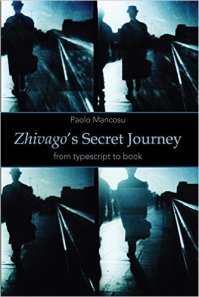 I append the description found in the flaps of the cover together with the endorsements by Prof. Robert Service (Oxford) and Prof. Lazar Fleishman (Stanford) found in the back cover.

Boris Pasternak began writing Doctor Zhivago in 1945. In 1948 he sent the first four chapters to his sisters in England, aware of the dangers his work in progress would pose for him with the Soviet authorities. The novel was completed in 1955 and between May 1956 and March 1957, Pasternak sent at least six typescripts outside the USSR. This book tells the story of those typescripts.

Continuing the research he began in his 2013 book Inside the Zhivago Storm, Paolo Mancosu conveys through newly discovered archival sources the excitement and pleasure generated by the exploration of events that were treated as top secret by all those involved.

Pasternak had sent Doctor Zhivago abroad hoping to pressure the Soviets to publish the novel at home. Although this effort failed, the astounding success of the translations took everyone by surprise. The book became a tool of the Cold War, with the Central Intelligence Agency (CIA) secretly orchestrating  a pirate publication of the Russian text in Holland in 1958. Two long-standing mysteries concerning the publication of this pirate edition were determining which typescript served as basis for the edition and who passed the typescript to the CIA. Through a detailed philological analysis, Mancosu solves the first problem and then offers, in the last chapter, a new perspective on who might have given the typescript to the CIA.

Mancosu’s riveting narration of the history of the publication of Pasternak’s epic work takes the reader on a whirlwind tour covering the network of contacts that, from Russia to England, from Poland to Italy, from France to Uruguay, brought about the publication of the novel in Russian and other Western languages. This book constitutes a huge leap forward in our understanding of the most complex political-literary case of the twentieth century.

“Just when we thought that most of the mysteries had been cracked, Paolo Mancosu’s book shows how the foreign publication of Boris Pasternak’s Doctor Zhivago was an even more complex process than anyone could have imagined. A wonderful work of a true scholar.”
Robert Service, Emeritus Professor of Russian History, St Antony’s College, Oxford

“Paolo Mancosu’s path-breaking  investigations, carried out in public and private archives in several countries, have resulted in a brilliant monograph on the history of the first (the CIA-assisted) publication of the Russian original text of Boris Pasternak’s novel Doctor Zhivago in 1958. Mancosu’s new book resolves almost all the riddles that have haunted Pasternak scholars for more than half a century.”
Lazar Fleishman, Professor of Russian Literature, Stanford University